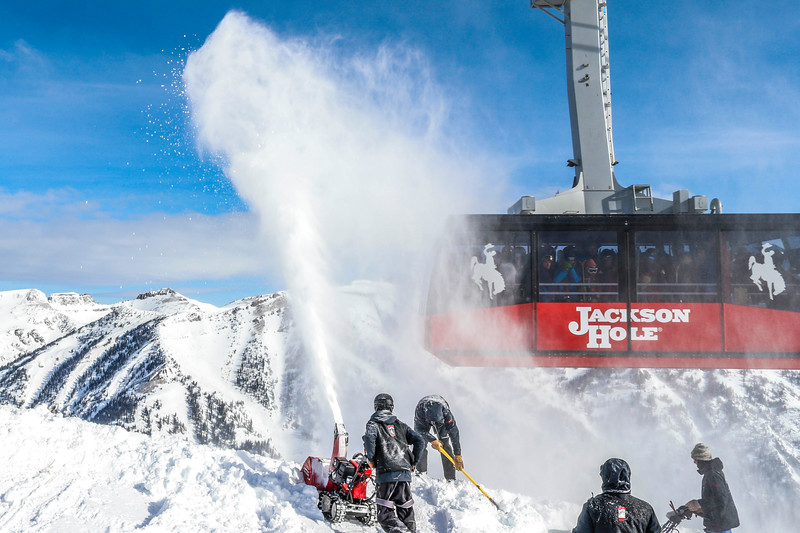 2017 has proven to be an absolutely epic snow year here in Jackson, Wyoming.  With this being my fifth winter, I have heard stories of years past; unending snow falling to reach totals of 600 to 700 inches.  Well this year has been on that same level.  By mid March we are over 500", with much of that being cold, blower powder.  We have also seen a bit of warm and extremely moist snow, including rain.  The mountain shut down for a week in February due to extremely high winds after an amazing cold storm cycle turned into a very warm storm cycle.  These winds knocked over 17 power line towers, leaving Teton Village without power for about a week.  While a variety of folks continuously worked to get the towers back up, the entire town of Jackson was trapped in or out due to wet slide avalanches closing all roads but one.  Within a week all the roads were cleared, wood beams replaced the steel beams, and everyone crushed it.  But this snowpocalypse was highly publicized.  The less told story involves a lot, a lot, a lot, of snow removal.

Working with Building and Areas (BnA) has always involved a lot of snow removal.  Our standard removal varies from sidewalks,  to icicles, and rooftops.  Many times ice damns will form causing water to leak into restaurants  or offices.  Icicles hanging off of roofs cause a potential hazard for employees or the public as they walk under unaware.  This year we had several buildings in town collapse, the mass amount of snow became extremely wet and heavy.  With flat or slightly slanted roofs being inefficient at removing snow; we have been shoveling non stop.  Everyday we have been on one roof or another.  We would love to know how many tons of snow we have moved all year, BUT without sufficient tools to measure such a thing we usually say its about a couple hundred metric fuck tons.  Regardless, we are good at what we do.

Therefore, when the world famous aerial tram started smashing against the snow at the top of Rendezvous Peak because there was too much, they called in BNA to come and help clear the path.  This tram scraping, smashing, rubbing or whatever, has happened in the past.  Considering it is the top of a mountain and at 10,500' ft, it's not too surprising.  This year was turning out to be especially bad and needed to be shoveled everyday.  The world famous tram holds 100 people, and if they can't fit everyone, people start to get sad, mad, and whiney. Therefore they called in BnA.

How to Save the Tram

We got up to the top of Rendezvous Peak and assessed the situation.  Even with all of us, plus help from tram ops, we knew that just shoveling was not going to be enough.  We then decided the best way to move it all was by using snowblowers.  So, this is on the edge of about a 1000ft cliff, which drops down into ten sleep bowl about a hundred yards from the yet again world famous Corbetts couloir.  Therefore the groomers could do nothing, ski patrol had been bombing all year, but it was getting to the point that bombs didn't help.  (Bigger bomb?)  They don't give us bombs.  Snowblowers it is!!!

The reason we had to do this so many days, for about five or six hours a day, was that it was blowing in about as fast as we were taking it out.  Very enthusiastically we would tie in and move snow for hours and hours in white out conditions.  At times you couldn't see the person right next to you.  Everyday we would get the level of snow down so that they could load at least 60 to 70 people allowing the tram line to keep moving.  By last Saturday the skies finally cleared and we got the snow level back down to where they could load 100.

The amount of energy we put into this is pretty astounding, even to us.  The truth is when you're that tired it's easier to just keep shoveling all day than to stop.  Stopping means you get tired.  Can't stop, won't stop.  I would be lying if I said we don't enjoy this.  But luckily the mountain valued our work and paid us a Little bit more than usual so that kept our spirits up.  Oh and of course shredding powder when we would finish always helps.  Good work eerrrrrybody!!!